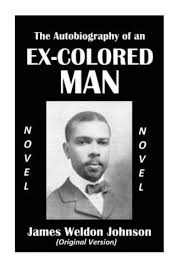 James Weldon Johnson’s,  An Autobiography of an Ex-Colored Man, is a complex and seething tale which, by its very existence, is a testament to Johnson’s  genius. Written in an autobiographical format, Johnson, who was 31 years of age at the time that this book was composed,  formulated and executed a memoir structure, which could virtually convince the reader that the story was about him.

In 176 pages, the reader journeys through the life of an extremely fair complected black man at the turn of the century. With actions that are both startling and woeful, Johnson’s character, who is nameless, lives his early life in the fog of believing he is white, even willfully participating in the antagonizing of Black students until a startling reality disrupts his unchallenged belief and turns his world a muted shade of brown. He states:

“One day near the end of my second term at the school the principal came to our room and, after talking to the teacher, for some reason said: ‘”I wish all of the white scholars to stand for a moment.”‘ I rose with the others. The teacher looked at me and, calling my name, said:'”You sit down for the present, and rise with the others.'” I did not quite understand her, and questioned: ‘” Ma’m?'” She repeated, with a softer tone in her voice:'”You sit down now, and rise with the others.'” I sat down dazed. I saw and heard nothing. When the others were asked to rise, I did not know it. When school was dismissed, I went out in a stupor. A few of the white boys jeered me saying:'”Oh, you’re a nigger too. ‘” I heard some black children say:”‘We knew he was colored.'”

This incident converted his view of himself, his community and ultimately, his country. Confirmation from his mother of his color, his race, his identity, although shocking, catapulted him into the solace and security of music and literature. And here, the story becomes a mission of acceptance, denial, and searching.

“I felt leap within me pride that I was colored, and I began to form wild dreams of bringing glory and honor to the Negro race.”

The question was: How was he to now face an America that saw him differently than he saw himself? And perhaps more profound is: How did he see himself? The narrator ventured into the unfamiliar; journeys from cigar making facilities to the historical and social beauty of France.  To some, his Black skin was invisible and to others, it appeared to beam like the soleil jaune in the darkest of darkness. This was essentially his duality. His unique ability to step into the vulgarities and secrets of both worlds. His interaction with Black men, as he journeyed across the country revealed certainties that were seemingly unknown to  whites, but, reality for the African-American, even today, was the understanding of whites that would never be reciprocated.

“Decreasing their number by shooting and burning them off will not be successful; for these men are truly desperate, and thoughts of death, however terrible, have little effect in deterring them from acts the result of hatred or degeneracy. This class of blacks hate everything covered by a white skin, and in return, they are loathed by the whites. The whites regard them just about as a man would a vicious mule, a thing to be worked, driven, and beaten, and killed for kicking.” (pg. 38)

The color of his skin, or perhaps lack of,  allowed him into the ‘talking rooms’ of that philosophy, that belief, that pitiful baseless theory. It was a camouflage that permitted him to witness the unhampered truth and, even in awkward interactions, a redefining of himself. Indeed, his earlier skin color revelation manifested into a quest to exceed the expectations of a Black man during that era, but more importantly, and maybe  I am excavating in uncharted territory here,  the experiences of the narrator seem to be about finding himself.  After several jaunts through America and Europe,  a musical ‘love affair’ with a few women (I can’t recall any of African descent), and his decision to make a life for himself in the United States as a ‘Negro’ composer, his reality is questioned and it is highly suggested that he take a less honest path to securing his success as a composer.

“My boy, you are by blood, by appearance, by education, and by tastes a white man. Now, why do you want to throw your life away amidst the poverty and ignorance, in the hopeless struggle, of the black people of the United States? Then look at the terrible handicap you are placing yourself by going home and working as a  Negro composer; you can never be able to get the hearing for your work which it might deserve. I doubt that even a white musician of recognized ability could succeed by working on the theory that American music should be based on Negro themes. “

It was easy to become engrossed by this story, to become sympathetic and, sometimes, apathetic regarding this plight; to forget that that which could be deemed a blessing could internally bring about a most catastrophic struggle. The narrator grapples with that struggle, fights himself,  battles his destiny.  As is the case of human kind, the greatest desire is to end that struggle at victory’s door. Like all things measurable, victory is both synonymous with and of equal stature as love,  and this is what our narrator finds, deeply. For the first time, after total acceptance as a white man, he admits to the woman who has firmly captured his heart that he is Black. The shock of this news alienates them, and his emotional tribulation takes hold. But hope indeed springs eternal, and it is proven that love does have power  far greater than the color of one’s skin. To keep this love, the narrator makes a decision. He has lived, fully, in two very similarly different worlds and has tasted the nectar of uncommon fruit, but only one fulfilled the sweetness he sought. He chooses to live in the world where a sweet love dwells.

“I can imagine no more dissatisfied human being than an educated, cultured, and refined colored man in the United States.” (pg. 119)

The Autobiography of an Ex-Colored Man is indeed a masterful, uniquely engrossing work of fiction. This is one book that must be added to one’s literary repertoire, or at least, to the reader’s short list. Johnson successfully channels the way one would look at others and, most profoundly,  how deep the veins of our own secrets may possible run.