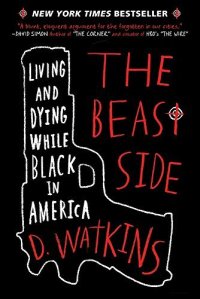 Title: The Beast Side

“D. Watkins is a very sharp young talent who transformed himself from a dealer on the streets to an adjunct professor, and most important, to a leading voice of his generation who is determined to see justice for the black community. The Beast Side is raw, intelligent, and at times humorous—and a necessary narrative in these challenging times!” —Michael Eric Dyson, author of The Black Presidency: Barack Obama and the Politics of Race in America