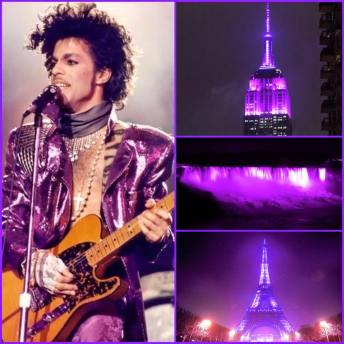 Prince was losing the signature flexibility that attributed to his fame. It was becoming obvious that his mobility was compromised, that he was suffering intense pain in his legs, and that, at one point, he was barely able to walk. Further, it was said that he was reliant on massive doses of painkillers to get him through. No one honestly knew.

For years we played a constant guessing game with Prince, although 99 percent of the time he did not participate. We ran amuck with created stories, dissected his songs, and pretended we understood him better than we understood ourselves; better, even, than he understood himself. So when we watched him go from stilettos to a hip-ass cane, it was simply another transition, as natural as winter in Minnesota; another prop that would soon and secretly be copied.  It was Prince,  and since he first came upon the scene in 1979, he was always the center of rumors. Always. But the painkillers left us questioning.

Throughout the month of March (2016),  I feverishly downloaded every Prince song I could, distraught by my inability to locate the long sought For You album. It was unusual for me to obsess over a musician or their songs. Although I am a lover of music, I am a wave of taste and genre. My mood, not Pop Culture, greatly dictates who and what I listen to. But Prince’s music was, for some reason, unshakable, and I wanted it all. And when the intricate, hypnotic percussion of “When Doves Cry” buzzed through my wireless speakers I was done. Memories came in the form of a flood, and I was drowning in the 80s. And then I cried, blaming the memories of past simplicity and youthful nonchalance. I had no idea what the tears were really falling for.

Thursday, April 21, 2016, Prince Rogers Nelson, the Purple One, The Artist Formerly Known as Prince,  Prince, was found unconscious, lying on the floor of an elevator at his Minneapolis residence. A flock of doves circled the familiar edifice in a synchronized ballet nine times before landing on a ledge facing the front gates. And a mistral suddenly rose from the north, cooling a slight radius and quickly disappeared. Unusual, though it was, no one paid attention.  Stranger things have happened. Mysteries regularly surrounded the house that Prince built, and stories would sprout from theorists for days and weeks. Then, like a dream you’d rather forget, the news.

The artist known as Prince is… DEAD.

The wonder was in the rapidness in which the word spread, from coast to coast, but the information was inadequate and spotty. And the universe stood still.

“Wait, what? Are you sure they said, Prince?”

“Oh, hell no, man. You know how people do. Fake hype. Getting people all worked up. Yo’, that shit ain’t nothing to be joking about!”

The announcement sparked a whirlwind of emotions and unity, more reminiscent of a social movement than a celebrity death, and perhaps this was a social movement, an opportunity for people of different philosophies and ideologies to unify and express their similarities rather than their many differences. And like thousands of others, I decided to write, after long thought, about what the life of this noted human being meant to me. It took several weeks to get my mind in gear. I couldn’t write while the planet mourned. I couldn’t think. The moments after the announcement and purple sky tributes were surreal. I still remain without adequate words, but I will try.

Attempting to write these few passages about how Prince defined and influenced my pre-teen and teen years proves difficult. During those years I was in a state of discovery. I was pre-pubescent and entering into the world that promised to bring immeasurable levels of joy and blues, the world that would take forever to comprehend. Through music, I discovered that the many emotions I felt could be adequately and accurately revealing. And then, like a drug that completely changes your perception of reality,  I was introduced to Prince.

Prince was unusual. My Queens, New York cousin, Reggie, introduced me to this strange little man’s music. Immediately, I was mesmerized. He was, for me and I believe many others, more luminous than the sun. Hypnotically we orbited around him, as he drew us with sounds no instrument of my understanding could ever make. The first song I heard was “For You,” a ballad coated in metaphorical simplicity but tremendous in emotion…

“I love you so much… This is for you… With love, sincerity, and deepest care….”

What it was about Prince that was most alluring is still uncertain. He was an enigma; Black and white, man and woman, oddly a sexy muthafker without effort, and a musical apparition that touched on the emotional religiosity that lay dormant in a world where manly men were the only acceptable type of men. I listened to his songs as a student of sexuality. The things he alluded to or directly professed were movies to my young and very impressionable mind. It was dirty. It was nasty. It was what I was thinking, but could not articulate. He was a secret to dozens of boys and girls who had transcended the world of magazines, child speak, and scrambled cable channels. He gave bravado to nerds and enough bravery to others to tell the opposite sex: “I Wanna Be Your Lover.”  To say the world had become obsessed is an understatement. We were disciples. We were His court. He was our Prince.

Throughout the years music changed, and rap became the welcomed essence of our new musical mentality. Sugar Hill, Grand Master Flash and the Furious Five, Dana Dane, Slick Rick, Dougie Fresh,  X-Clan, Spoonie Gee, King Sun, and dozens other inner city storytellers dwarfed the smooth rhythm and blues we grew up on. The music meshed, blended into a globe of sound and hovered in the secretive alcoves of Black dwellings then quickly dominated the airwaves. Hard lyrics and beats exploded from car stereos and open windows. Cult like in its appeal, hip-hop (rap) transformed the downtrodden and overlooked into Gods, and we wanted to be them, too. Out of hidden spaces came boys birthed from the advent of this new musical form. They were given personality, purpose, and identity. Rap justified their person and alienated many who couldn’t effectively wear the costume of Kangol and Cazal. But Prince remained steadfast, and we joyfully remained hypnotized by his consistent and familiar sensuous rhythms, beats, and words…

“I truly adore you…”

“If we cannot maybe babies, maybe we could make some time…”

“I know a girl named Nikki, I guess you could say she was a sex queen.”

Although the emergence of rap was an appreciation, Prince was my voice. He ended the awkwardness and the lack of the ‘right thing to say,’ when the words evaded me. He was the background coach toward lost virginity and physical inhibitions. College would not have been quite the same without his falsetto. Mornings and nights in Atlanta echoed his sound. We wooed our girlfriends, just friends, or wish-friends with his punctuations and pronouncements. Along the Atlanta boulevards, boys dressed in lace and sporting pompadours lined their eyes with black mascara and stood at bus stops where college girls gathered. The girls often pointed and laughed. The Prince impersonators misinterpreted that laughter and mimed their way into embarrassment. It was the 80s. I often wonder if some won.

“I was sitting in the front row. The front row! And Prince does this high pitched scream, but he’s nowhere to be seen. And then he comes from beneath the stage in a bed! A fuckin’ bed, man. Unbelievable!”

For decades, even when the innuendoes lessened, Prince’s first several albums solidified his place.

I often hum his lyrics subconsciously. I’d whistle his songs when something struck memories that were frozen in time or when I smelled that sweet long ago perfume. I wrote letters that quoted him as if my English major sensibilities were matchless to this literary Bard. How did he know what to say, and when to pause for an effect beyond poetic? He was the Piper and the lure worked, amazingly, for those who believed.

Through the years he mellowed; became the conscious voice of a nation in peril. He gained riches and quietly, secretly, saved the lives of names we’d never know. He remains one of a hand full of singers/entertainers who could stop us in our tracks and remind us why we exist. He was my friend, my brother, my mentor, and the light I’ve never met. Prince was personal, as a million people stood in the streets from Bangkok to Minneapolis chanting his words proves unequivocally.

The world seems lighter without his weight. Our souls weep deeply. My early years are truly memories with little meaning. Still, we had him, and he had us, and thanks to Prince we (I) will always know love.

One thought on “The House His Majesty Built: PRINCE”